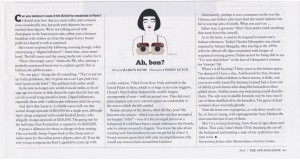 We used to fret that the internet would render fashion shows obsolete. While the opposite is the case, it’s us, the professional audience, whose days must be numbered.

There’s no such thing as “fashionably late” in a world of live streaming.

Time was when, if the invitation said 4pm, you could dawdle over to a cafe near the venue, enjoy a cup of tea, or, if you were feeling full-on fashionista, a glass of champagne, yet still fret that, by turning up before 5pm, you’d be revealing yourself as a rookie who was frightfully keen.

Today, 4pm means in your seat at 3.45 pm or the designer’s PR will be SMSing frantically. It means sitting up straight and slapping on your catwalk smile by 3.50pm, then it’s lights down, music up and a huge screen running a countdown as viewers in Dubai, Hong Kong, Los Angeles are welcomed to start “shopping the show”. You can buy the coats at Burberry, to arrive months later, in 150 countries, as they are appearing on a catwalk in London. What you can’t do is bribe your way in once a show has started – as I discovered at 4.01pm. Opps.

Lesson learned. Over in Paris, I got to Louis Vuitton so horribly early, I had to sneak off for a coffee so as not to linger with the kids who snap the arrival of the front row set for their blogs. The Vuitton show was staged at the Cour Carree du Louvre, as it has been for several seasons now, but just to make things interesting, they changed the point of entry. Cue scores of people, myself included, who glancing over and, seeing no line yet, relaxed and ordered another “cafe creme”.

People may think we fashion folk are so dumb, we can’t walk and chew gum, but let me tell you, once I realised entry was via the gate around the corner, I was sprinting, texting to friends in five inch heels to “move it from the café, now!” and thinking how HUGE the Louvre is, all at the same time. True, I couldn’t remember exactly which Louis had extended the old chateau of Francois Ist until it became a palace that seems to take up half of France but I did keep wishing he’d put in more cut-throughs. Luckily, I was in my seat when the show started, but as it featured women in handcuffs, I got hot under my feminist collar all over again.

Those of us who watch fashion shows for a living are increasingly questioning what they are for, (although kinky handcuffs, are, you have to admit, a whole new product category to brand). The truth is dawning, chillingly, that shows are no longer for those on the seasonal schlepp from New York to London to Milan to Paris. We used to fret that the internet would render fashion shows obsolete. While the opposite is the case, it’s us, the professional audience, whose days must be numbered. “Shopping the show” online still requires skinny girls (one of whom, this season, is a boy) walking up and down in the clothes to click and buy. The vast lobby of net-a-porter, the pioneer of luxury online, is dominated by a gigantic screen showing designer shows. The Burberry website, the Burberry stores, feature more catwalk footage. The equation of “1,000 seater show staged like a rock concert + clothes to click on now” is key to how this British brand has become a GBP 5.1 billion fashion megalith.

But what of the 1,000 people who are invited to attend? What purpose do we serve, now that anyone can go to London’s Piccadilly Circus and watch the Burberry show, simultaneously, on a 32-metre digital screen? (As I did)  What is the point of fashion critics now the public, on twitter, on apps, shopping as they go, votes on what’s fashionable now? As for those of us who go to actual shows (if we are not locked out, at 4.01pm), how long before they just paint us in by CGI?