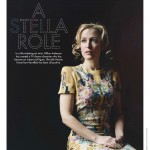 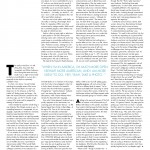 In a life-imitating-art twist, Gillian Anderson has created a TV drama character who has become an instant cult figure. She tells Marion Hume how the effect has been all positive.

This really is bad form. I’m still sitting here, hours later than I expected, and Gillian Anderson, she of that gimlet stare and surly mouth, has no right to have made me feel so uncomfortable in my own skin – especially as she looks so supremely confident in hers.

It is 5am. I’m alone. I’ve just finished watching the complete series of the crime drama The Fall and there’s no way I can sleep now. So I’m sitting up, as the final credits roll, feeling jumpy and angry – the latter with myself, because I perched on this sofa hours ago, just for 10 minutes, to get a sense of the series and be prepped for meeting its lead.

I never intended to watch the whole thing in one sitting, but The Fall gets a grip on you. It’s compelling because it’s unexpected. It’s not “Scandi crime”, especially as Anderson’s character, Detective Superintendent Stella Gibson, wouldn’t be seen dead in a big ugly jumper. Instead, she is the centre of a universe into which men are invited, often for sex, then dismissed afterwards, followed by an expensive glass of pinot.

It is a mistake, of course, to confuse character with actor, yet Gillian Anderson so utterly inhabits her blisteringly intelligent and fiercely sexy detective that when the series ran on the BBC last June, it provoked an internet meme called “What would Stella do?” What Stella Gibson does when a male colleague comments on her seduction of a policeman is to fire back, “Woman subject, man object, it’s not so comfortable for you, is it?” and you can almost hear the sound of women around the world applauding. But what Stella says to an intrusive reporter is this: “No one knows better than me how important the media is … but really, you should f… off now.”

So it is with some trepidation that I set off to meet Gillian Anderson. She turns out to look rather unlike Stella, as she walks in wearing a floor-length, floral flutter of a sleeveless chiffon maxi dress accessorised by wedge sandals. Stella would be in something slippery, mean stilettos and the peek of a black lace bra.

Fashion, often not quite right on television, is pitch perfect in The Fall, where power dressing means satin in blush pink and a key scene hangs on a wardrobe malfunction at a police press conference. “It’s not fashion, it’s style,” Anderson corrects, relating how she and the costume team booked a VIP suite at a department store, then narrowed down Stella’s look from hundreds of separates hanging on the racks – no pant suits. When the series aired in the UK there was a marked spike in the sale of silk blouses.

We meet at London’s Young Vic theatre. Anderson has the looks of a beautiful woman whom the world thinks is gorgeous (“haughty lips”, “aquiline features”, “pellucid eyes” are among the more cerebral descriptions, while “sexiest woman alive” remains the favoured lads’ mag tag).

From what I have gleaned, Anderson has a reputation as a prickly interviewee – not surprising given she became famous as FBI Special Agent Dana Scully in The X-Files at the age of 24. Thus, at 45, she has spent more than two decades contractually obliged to promote her performances by chatting to the press. Having waded through clippings fatter than a police file, I find myself in sympathy – any sane human would be scratchy when asked, again and again, to reveal the truth about aliens, even though it is more than 10 years since Anderson left Scully behind and changed her hair from red to blonde.

After walking two steps behind David Duchovny’s Fox Mulder from 1993-2002 (although when she found out he was paid double she demanded, and got, wage parity) Anderson surely showed how sane she was by getting away from paranormal sightings in Vancouver and moving to Britain, where she spent the next decade garnering plaudits in television costume dramas such as Bleak House and Great Expectations. She also made movies (The Mighty Celt, Shadow Dancer) and turned down Lady Cora in Downton Abbey.

Today, she’s not prickly at all, instead passionate about The Fall and the relief that the role of DSI Gibson is making her known for being a grown woman – “although I’m not Stella by any stretch”. She senses, she says, her fame level rising again, as people snap pictures on public transport without asking (she takes the train and the London buses). Thankfully, this is nowhere close to what she had to deal with in her 20s, when the paparazzi rammed her car in order that, when she got out to get insurance details, they could grab their shots.

“I feel that Stella has had nothing but a positive effect on how I am in my life. Not to say there weren’t elements before, but I think she’s sharpened my sense of self and femininity,” says Anderson.

What of those feminist ripostes? “Well, I’ve always been the person most likely to say ‘f… off’,” she admits in her crystalline British accent (having spent part of her childhood in the UK, part in the US, she can switch seamlessly). “But the fact Stella is able to say ‘f… off’ with such poise brings her a different level of respect.” As for “What would Stella do?” becoming an online mantra to inspire other women, Anderson has had bumper stickers and fridge magnets made, with the proceeds going to a women’s shelter.

Adding to the mercurial unease of The Fall is its location in the still-scarred city of Belfast. DSI Gibson is the outsider, seconded from London’s Met because the Police Service of Northern Ireland has failed to catch a killer preying on young businesswomen. She does nothing to ingratiate herself.

The writing is whip-smart and female-friendly (although penned by a man, Allan Cubitt). “I think people expect me to be a lot more intelligent than I actually am, because I played Scully and now Gibson. But that’s not a bad thing,” says Anderson. “The majority of the women I’ve been blessed to inhabit are women who I’m flattered to have been able to spend time with, and for people to think I’m even remotely like them is great. Although there have been a few thrown in there that are less appealing,” she deadpans, perhaps referring to the intractable Lady Dedlock and the flinty Miss Havisham.

What’s novel – though it shouldn’t be – is the capacity for female friendship that ripples through The Fall. “That’s really important,” says Anderson, fire-flashing those pale sapphire eyes, “to show adult, mature women – completely different in the experiences they’d been through and the choices that they’d made – bonding through womanhood. Too often, what is portrayed between women is either ‘girly’ and going shopping, or the opposite, the negativity.”

In the show, a female detective and forensic scientist discuss how they balance the dead bodies at work with live ones at home, talking of “doubling”, “compartmentalising”. “I compartmentalise everything,” says Anderson. “It’s useful in the work that I do, but it can be very separating in my personal life.”

That life cannot be entirely personal, given Anderson was thrust into the spotlight virtually straight out of drama school. Then she proved catnip to the tabloids by having her first child, Piper, as the first series of The X-Files reached a cliffhanger close. She married a Canadian, gave birth, returned to work 10 days later, got divorced, married again, divorced, had her sons, now aged seven and five, within a now-defunct long-term partnership – Anderson’s whole adult arc has been documented. Plus, she’s peppered it with all manner of juicy details (“‘I’ve experimented with women’ – X-Files star confesses to lesbian flings”, The Daily Mail) because she does interviews alone, including this one, with no publicist hovering to keep things on message. In high school she was voted “Most Bizarre” and “Most Likely to Be Arrested”.

She says her own judgment has matured, that she sees people beyond the pigeonholes she once put them in. “Human beings are so much more complicated than we often give them credit for. We see someone on the bus and we put them in a box. Then you discover that, actually, that person has been sexting with half of the world – all of that kind of stuff, it’s shocking!” she laughs. As for those buses, “If it gets too intense, I’m pretty good at putting up a wall of ‘Do not stare’. I actually find that, when I’m in America, I’m much more open. I behave more American, and I am more likely to go, ‘Hey, yeah, take a photo.’ I’m much more guarded here, but that’s because I think I’m much more British here.”

Maybe I’m being terribly British because I find I have no desire to ask Anderson if she’s dating or how her young-adult daughter is fairing or how she juggles work as a single mum with two little boys at home. But then I realise this isn’t about nationality, it’s about professional respect. As we talk about her ambitions, about Stella’s wider role as a representation of 21st-century middle-aged womanhood, we are businesslike. Because, after all, acting is Anderson’s business and her accomplishments are evident. And I have entirely forgiven her for my sleepless night.

The Fall starts on BBC UKTV on Foxtel on October 19.