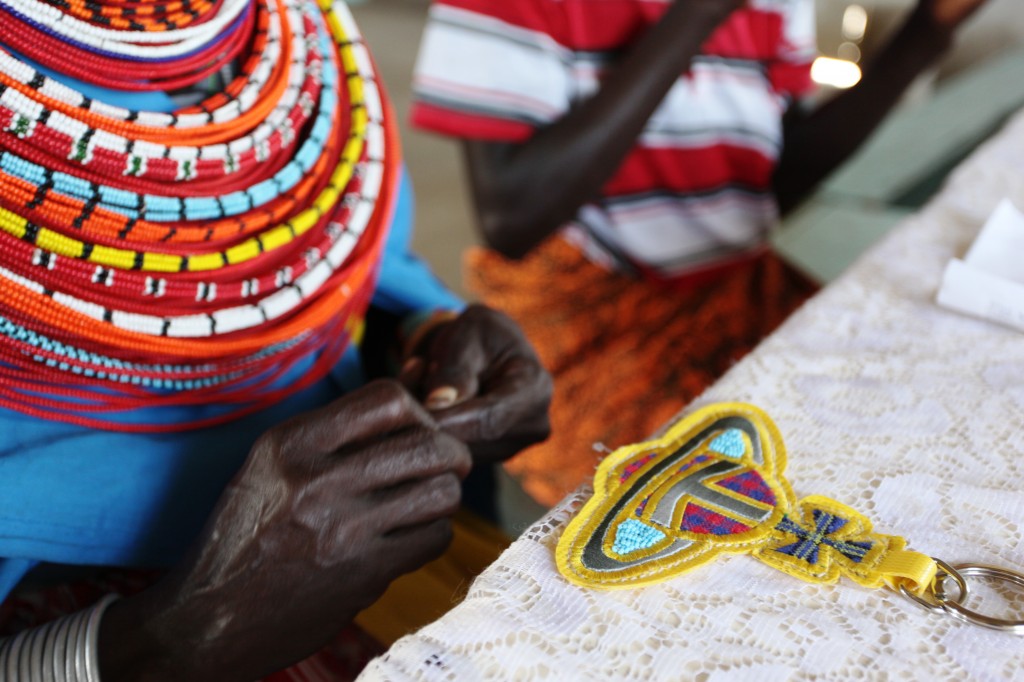 How has the recent terror attack on Westgate Mall in Nairobi changed things for designers with manufacturing connections in Kenya? Marion Hume reports.

NAIROBI, Kenya — Bex Manners, aka Bex Rox — which is the name of her costume jewellery line — figured it would be sensible to sit down for a proper brunch. A long working day lay ahead, then the midnight flight back to London. But time was pressed. So instead she grabbed take-out from ArtCaffe and went on her way. Less than 15 minutes later, terrorists stormed the Westgate Mall. The four-day siege in Nairobi left at least 67 dead, 39 still missing, a nation reeling.

You might be surprised who in the fashion world has ties to Kenya. Bex Rox is known for rock and roll, party-all-night-in-Ibiza edginess, not “ethical” or “Africa.” A connection to the continent happened by chance. She was in London’s Portobello Road, bumped into Cristina Cisilino (of the high-end jewellery producer, Crea Africa, based in Nairobi) “and the next thing I knew, I had a 40-piece collection being prototyped and I flew out to [Kenya] to see samples through the final stages.”

A Paris fashion week party to show off “Afrika” — including bold bracelets in gold-plated brass and knuckleduster rings in sock-it-to-you brights — went ahead as planned. Yet as guests sipped cocktails and took in the view of the Eiffel Tower from the private residence, on loan for the night, talk turned to near-misses. “The first thought was, ‘Are our friends safe?’” said Erin Beatty, design director of Suno and veteran of the New York-to-Nairobi commute. “Common sense told all of us not to go to Westgate,” said a subdued Max Osterweis, founder of Suno, the label named after his mother, who has had a home on the Kenyan island of Lamu since his childhood. “But when you need something for your laptop, it’s where the Apple store is. It’s where the book store is; the ATM.”So what now?

“I can say our customers have been buying a lot,” says a still-shaken Manners. “Is that because of what just happened? Honestly, no. It’s because it’s handmade, lovely and I can cater exclusively for small quantities; I can offer an amazing colour palate with the Maasai beading.”

Osterweis is of the opinion that caring can never come first in fashion, this despite founding Suno because he cared so much. The son of a wealthy family, he launched Suno instead of writing a bit fat charity cheque after Kenya’s post-election violence, in 2008, claimed over a thousand lives and left 350,000 people displaced. As he told me when we met in Nairobi for a Time magazine story (April 2009), “I wanted to set an example to show that investment in Africa need not be about building more safari lodges.” An entirely “made in Africa” label was never the ambition however. “I’d seen brands being unrealistic, so we’ve invested in people’s strengths, produced what we knew could be done well in Kenya, while also producing elsewhere,” he told me then, revealing his aim to dress cool girls for hot, New York-summer nights, while, at the same time, providing work to skilled Kenyan artisans (as well as those in Italy and the United States).

Today, fans of Suno include the actress Elle Fanning, the artist Cindy Sherman and American First Lady, Michelle Obama. And as the label has soared, so too have the number of units made in Osterweis’ second home nation, bolstered by an additional online offering of sneakers, pyjamas and totes made exclusively in Kenya. “No one has said ‘I’ll order more,’” he says now. “People buy what they like.” As for his commute, “Nothing changes, except we won’t be eating pizza at Artcaffe. What happened is not a Kenyan problem, it’s a global problem. It’s not life as usual. It’s dealing with life as it is.”

Because it was founded by Bono and his wife Ali Hewson, Edun attracted first ludicrous expectations then harsh criticism, especially after pragmatic, LVMH-appointed CEO Janice Sullivan insisted on scaling African production back to ensure a viable economic foundation for the brand. (“Out of Africa, Into Asia” was how The Wall Street Journal reported the decision, back in 2010). Sullivan’s tactic to pull back, shore up, then reintroduce the African production that was Edun’s central “raison d’etre” seems to be working at last. Over 80 percent of the line is now made on the African continent, although the percentage in Kenya, where it all began, remains quite small.

“No one has brought up Kenya once,” says Sullivan at Edun’s Paris showroom, this while fingering a goat horn and silver collar, made in collaboration with Nairobi-based jeweller, Penny Winter. Instead, she says, the chatter is about the brand’s new designer, Daniela Sherman (formerly of Alexander Wang and The Row). So will Edun stick with Kenya, especially given growing production in Madagascar means the brand could easily pull out of a trouble spot and still hit its “made in Africa” targets? Ali Hewson, who has joined us, looks incredulous at the suggestion. “We were in Kenya for the riots of 2008. We were in Uganda for the attack at the World Cup. We were in Mali two weeks before the coup. We’re Irish!” by which she means proximity to risk won’t change a thing.

Ilari Venturini Fendi admits to being nervous in Nairobi, “constantly aware of the possibility that something so bad might happen. It’s always been quite complicated to work in Kenya.” Whether she returns soon or not, there’s no question that her socially conscious, made in Africa accessories brand, Carmina Campus, will continue to operate in the country, where the facility to achieve the label’s ethical goals at the high quality expected by a Fendi is already established. Each season, artisans in Italy connect with those living in the slums of Korogocho and Kibera via video which, Venturini insists, is not about “us” teaching “them,” but instead an exchange of ideas and know-how.

Chan Luu’s seed bead wrap bracelets in raw-cut leather are hot sellers. Do global stores care that the Los Angeles-based celebrity jeweller produces in Kenya (where she may be the largest single contractor of Maasai beaders, all paid a fair wage)? “What matters is everyone buys!” she shouts across the melee of those placing wholesale orders at a showroom in Paris. In a quieter moment, she adds, “I believe poverty can create violence. My customers want to do good for the world, so they support these ethical fashion projects.”

Both Luu and Venturini Fendi were introduced to Kenya via The United Nations’ ITC Ethical Fashion Initiative, (full disclosure: it was on assignment in Kenya for Time that I met the head of the initiative, Simone Cipriani, and, as a result, began working with them). “The terrorist attack has produced a double effect,” Cipriani says. “Yes, short-term travel plans of colleagues in the fashion industry have been disrupted. First of all, we work to keep collaborations with us stable, supplying African artisans with ongoing work in a meaningful way. Another important reaction is from fashion brands wanting to bring work to Kenya (several more brands have reached out since the Westgate siege). Terrorism is a global threat. A way to fight is by giving work and dignity to every human being. And if we do it, by creating beautiful, unique and gorgeous products, so much the better for everybody.”

Surely eternal activist and ethical pioneer, Vivienne Westwood would agree? Did she include so many Kenyan bags in her Paris show this season out of solidarity with artisans she met when she visited Nairobi in 2011? “They’re my favourite bags, that’s why I show them,” says ever-honest Dame Viv backstage. “I show them because they’re lovely.”