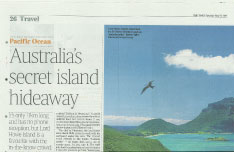 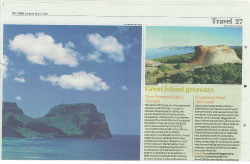 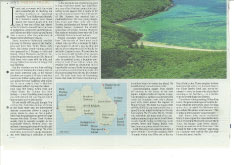 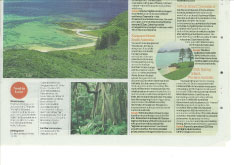 The Times | Sunday 12th May

It’s only 11km long and has no phone reception, but Lord Howe Island is a favourite with the in-the-know crowd, says Marion Hume

I once met a woman with the weird and wonderful job of checking out far-flung locations for “vacational suitability” for a Hollywood clientele. So I shared a secret: Lord Howe Island. She hadn’t heard of it, but then, it was one of the last islands on Earth to be discovered. It bears no trace of indigenous settlement and Europeans and Polynesians didn’t show up until more than a century after the publication of Daniel Defoe’s Robinson Crusoe.

Savvy Aussies-in-Hollywood certainly slip away to this tiny speck in the Pacific, governed from New South Wales. Judy Davis, the Emmy award-winning actress who appeared in A Passage to India and Woody Allen’s Husbands and Wives, has visited its golden sands, as has Eric Bana of Hulk fame, who came with his kids, and George Miller, the director of Happy Feet and Mad Max.

But the islanders are too busy milking their cows or minding their honey bees to pay much attention and, as for visitors (numbers are capped at 394 at a time), why would you bother ogling stars when you can spend the time paddling with exotic fish in more colours than a Matthew Williamson Kaftan? Anyway, the island – 11km long (6.8 miles), 2.8km wide and 770 km across the Tasman Sea from Sydney – is out of mobile phone range, so you can’t call and tell your friends which famous name you’ve just spotted.

It’s not totally off the grid, though. You can buy the Australian edition of Grazia at the local store and an intermittent internet connection allows a couple of young mums to shop on Net-a-Porter (then wait for purchases to arrive by barge because the daily 32-seat Das 8 plane usually flies at capacity weight). As for fashionable visitors, Stephen Jones, the milliner, is among devotees of what he calls “an unspoilt hideaway”, adding: “In a few short days, Lord Howe’s magic transports me, even inspiring a collection of mine entitled ‘Drifting & Dreaming’.” A gentle respect pervades a place where the school uniform does not include shoes. If  you need to move faster than you can walk bare-foot, you hire a bicycle. (The speed limit for the few dozen cars is 25km an hour.)

The chef at Pinetrees, the local hotel since about 1848, cycles to work with his surf board under his arm. The relaxed mood extends to the hotel’s “business centre” – an empty desk and a can of mozzie spray. No one uses it. The staff joke that they place bets on how few hours it takes guests to go from “boardroom to BBQ”.

“A few people do ask where the lap-pool is. I say ‘over there, mate’.” says Luke Hanson, one of the Pinetrees’ proprietors, gesturing to the lagoon that is home to 90 species of coral and more than 500 species of fish. Hanson has married into a matriarchal clan. His two young daughters, Elsie and Pixie, with wife Dani Rourke, an islander and former hot-shot Sydney lawyer, represent the seventh generation of women running Pinetrees (for, make no mistake, three-year-old Elsie definitely thinks she is running the place).

There’s abundant nature and history here. Take the tale of Dani’s great uncle Albert, who ran off as a teenager, by lighting a beacon to attract a passing ship and said he’d been shipwrecked. Eventually he settled in England, where 30 years later, he wrote home to tell the folks his new job – boatswain on the Titanic. Some 50 years after he perished at sea, s daughter traveled to Lord Howe Island, where she recalled her father as delusional; full of improbable stories of birds balancing  eggs on branches instead of building nests and flocks swooping from the sky at a human call. It’s such true facts of fascinating fauna that made Sir David Attenborough breathless when he vanished to the island. He described it as “almost unbelievable”.

Accommodation ranges from simple self-catering to the luxury of the new duplex Lidbird Suite at Capella Lodge, which features a bathtub on a private deck under the frangipani trees and a plunge pool with views across the lagoon to Mount Gower. The latter is a tough climb of 875m (2,870ft), so a more sensible way to spend the day might be lazing on the day bed reading The Freudian Slip by Marion von Adlerstein, the must-read of the Australian summer, in part set on Lord Howe. Lovely Capella lodge is child-free, so its owners, James and Hayley Baillie, who have four young boys, stay at Pinetrees.

Lord Howe isn’t an island to jam into a tight schedule. There ‘s the voyage to Ball’s Pyramid, which rises 551m out of the sea life a Gothic spire. There are glass – bottom boat trips that are far less frenzied than on the Great Barrier Reef, and not-to-be-missed – even by those who think bird-watching is for twitchers – is a ramble with the ornithologist Ian Hutton.

Then there is doing nothing. When Kris Lewis, the general manager of Arajilla Re-treat, returned after seven years working across Asia, he asked the fisherman who also refuels the planes what was new. “The windsock at the airport,” came the reply.

Still, there’s been much excitement lately. A new copper has reported for duty. Senior Constable McGrath’s correct title is “Lock Up Keeper Lord Howe Island”, though no one even locks their doors. The closest thing to that is the “privacy” sign hung on a banyan tree outside the yurt that houses the sap at Arajilla.