In Australia, she is as famous as Kylie, and her easy, idiot-proof recipes have won her fans worldwide. Now she has her own glossy magazine which outsells Vogue. Marion Hume meets Donna Hay, Delia of Oz. 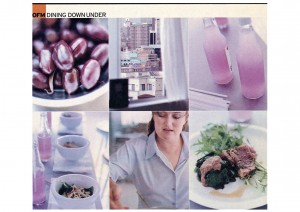 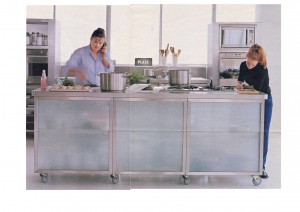 ‘Clotted cream first, or jam?’ I ask. I’m in Sydney, Australia, facing some tough choices. Should I opt for the strawberry and vanilla bean jam or the yellow peach and passion fruit? Or mixed berry? And is putting clotted cream first a foodie faux pas? ‘Oh, go for it,’ urges Donna Hay pushing the bowl of cream across the table in her sunny studio. ‘Otherwise it gets all in your lippy.’

The 32-year-old Australian cook has built an empire on such practical solutions. There are those, such as my Devonian husband, who insist it’s cream on last. But he doesn’t wear lipstick. In Donna’s world, traditions only stick if they make sense, which some just don’t in the perpetual summer that is life – for at least nine months of the year – in her town.

Why shouldn’t lasagne be ripped by hand, boiled and served with a parsley pesto for the swift satisfaction of a hunger earned on the beach? Why must it be baked in the oven under a leaden blanket of bechamel? And why should panzanella be made of stale bread, so, as Donna puts it, ‘it looks like a dog’s breakfast and tastes all soggy’ when the Italian salad can be revamped with sourdough toast to accompany baby spinach, tomatoes, basil, black olives and red wine dressing so it tastes of summer? Why should ice cream be the reserve of those with a machine to make it? Why shouldn’t semifreddo – aka cheat’s ice cream – do the trick?

It’s the promise of speed, fresh produce and, most of all, sunshine that shifts Donna Hay’s bestselling cookery books around the world, especially in the winter. The photos are flooded with light. Millions of readers worldwide are, it appears, undeterred by unfamiliar ingredients like yabbies or the fact that piles of prawns and fresh tuna (two vital Donna Hay ingredients) are not easily affordable beyond Australian shores.

There are winter dishes – no Aussie could call themselves a cook without knowing how to roast a leg of lamb (Donna’s trick is to plonk the joint on a big bunch of rosemary atop a wire rack suspended above a baking dish of potatoes) – but mostly the fantasy, for northern hemisphere fans, is of easy, breezy dinners; of chargrilled vegetables or 101 fast things to do with noodles when you are worn out after a day in the surf on Bondi.

In fact, Donna Hay doesn’t surf. She hardly even gets to go to the beach these days. Life is busy. There are her newspaper recipes, seen by one in six Australians each week, which have made her so famous that ‘cooking a Donna’ has entered the vernacular. And we’re not talking kebabs – rather a Donna dish such as pasta with lemon, rocket and capers.

And now there’s the bi-monthly Donna Hay magazine, £5, with its catchline ‘turn simple into special’, which was launched a year ago with a party at a Sydney beachside pool. The first issue, featuring a scoop of vanilla semifreddo on the cover, was expected to sell around 20,000 copies in Australia. It sold three times that figure. The next issue (an asparagus and ricotta tart was the cover star) sold 95,000 copies. To put this in context, Vogue, which has been in the Australian market for over 40 years, sells fewer than 50,000 a month.

Now the magazine has subscribers in London, Manchester, Amsterdam, New York and even some cities in Africa. But real addicts insist on having it FedExed, despite it being so crazily out of sync with northern hemisphere seasons that the July cover featured a mug of hot chocolate.

What appeals is that everything Donna does is easy (with the exception of slaying your own shellfish, which perhaps should be left to her home audience). She is irked by any recipe that calls for five pots. ‘I’ll try to make the sauce in the pan the chicken’s cooking in,’ she says. Plus she loathes the pursuit of perfection. ‘I hate that “if you don’t whip these egg whites then you are going to fail” stuff,’ she says. ‘So yours might not be as light as Gordon Ramsay’s soufflé. He didn’t make yours. You did. The precious side of it drives me insane.’ No surprise that when Martha Stewart offered her a job she turned it down.

Her skills were acquired not in a restaurant, but at home. Donna started to cook when her mother struck the bargain that she could get out of the washing up if she made the meal. By the age of eight, Donna had mastered Steak Diane, although today, she is more likely to serve steak pan-seared, thinly sliced, tossed with basil, bocconcini, chives, and a tangy mustard dressing.

Donna Hay does have her critics: mainly experts in the industry who find it a touch irritating that this self starter has become rich and famous by peddling recipes that a child could master.

Yet, there is little sign of a real anti-Donna backlash, even among those foodies who will slow-roast a joint in 80 cloves of garlic for an entire weekend. They might claim that they find her fast food simplistic, but will then admit that, on busy days, they whip up one of her 10-minute dinners. It’s true that her chocolate cake is slightly further from heaven than the River Cafe’s Chocolate Nemesis, but it is a heck of a lot easier to make.

Her team of three cooks must stay within what she calls ‘the Donna Hay boundaries’. ‘Isn’t that getting a little hard?’ she calls over to one of the cooks, who is poaching a ‘three-times cooked’ duck, which will be roasted, then fried. ‘But the flavours are going to be really delicious,’ comes the reply. Another 10 minutes pass. ‘Isn’t that a bit hard?’ Donna asks again as the cook starts to prepare the accompanying potato and garlic purée. Facts are faced. The dish is eliminated for having run into overtime. ‘Great!’ shouts Donna’s magazine team. ‘It’s duck for lunch, girls!’

‘I always think of poor Michelle,’ explains Donna (Michelle is an imaginary woman), ‘who has so few minutes to spare. If she can’t spare the time, I scrap it. Hence Off the Shelf, Donna’s most popular cookery book, published two years ago. The idea was simple – you treat your pantry and your freezer like a wardrobe. You stock up with useful basics and chuck out all the sad stuff. ‘Don’t send me out of my way to buy an ingredient,’ says Donna who suggests you invest in thyme, oregano, rosemary, cumin, coriander, cinnamon; dried noodles, frozen pastry (making your own is, she thinks, too much work for ‘poor Michelle’). Then you add fresh ingredients, so it is easy to whip up a balsamic squid and rocket salad followed, perhaps, by ‘basic and speedy brownies’ when you entertain. ‘If you want restaurant food, go to a restaurant and order something you would never make at home,’ she says.

In Donna’s world everything looks simple too – at home and in her books all dishes are served on dishwasher-safe white plates and bowls. When Donna graduated from college, she became a food stylist at a time when a sheaf of wheat, a spray of carnations and a patterned plate were required to accessorise a fruit cake for photography. She stripped things back to a white plate and got her big break in 1995, aged 25, when Marie Claire magazine launched in Australia and wanted something new for the food pages. Next came the Marie Claire cookbooks which, by accident, had to be published in Britain under Donna’s own name, given that The Observer’s Nigel Slater was the food editor of the British edition of Marie Claire at the time. It was the beginning of Donna Hay, the brand.

She has no restaurant and no wish to open one. She has no television show because ‘the truth about cooking is you do a lot of this [she mimes stirring a pot], which doesn’t look very exciting.’

Her mantra is that fast home cooking requires cutting a few corners. She always uses packet pasta because it’s easier. ‘When I see Jamie [Oliver, a friend] on TV going “this is so easy” as he’s wheeling out his pasta sheets, I go, “come on Jimbo, that’s crap,”‘ she says, with typical Aussie frankness. You won’t see her licking the spoon while cooking in a skintight cashmere cardi either. She guffaws at the notion. For Donna, kitchen dress is a white shirt under her pinny. If she’s getting really fancy, she might wear a blue shirt.

For the next few months, she’s putting the speedy, breezy freshness on which she has built her brand to the ultimate test. For she is now especially time poor. Four month ago, Donna and her partner, Bill Wilson (who is also her local butcher), welcomed the arrival of baby Angus. If future issues of her magazine feature meals you can whip up in between feeds, you’ll know that when it says ’10 minutes’, it means just that. The no-nonsense, straight-shooting believer in turning simple into special will have tested it and timed it.