A long way from the World Cup epicentres of Johannesburg and Durban, catwalkers in New York and Paris are already marching to an African beat. And why not? If global business will have its eye on all things African this month, chiming with the prevailing mood makes economic as well as sartorial sense.

The work of Nigerian-born, London-based Duro Olowu, for instance, combines vintage couture fabrics and silhouettes with African prints (Princess Caroline of Monaco wore an Olowu evening gown at the Bal de la Rose – an annual event in Monaco attended by the royal family – in March). “What’s interesting,” Olowu says, “is the level of sophistication, which reflects the way African people have always combined European fabrics with indigenous culture. For a long time, there was a sense that this was limited to Africa but now it has become global. Combined with an awareness of social responsibility, it makes for a powerful statement.”

But there is more going on here than simple visual pillaging for mood board inspiration. Elbaz’s work, for example, was inspired by a meeting with United Nations officials to discuss potential projects for the brand in sub-Saharan Africa. As for von Furstenberg, back in March she co-hosted the “Women in the World” summit in New York, which included Hillary Clinton, Meryl Streep and female micro-financing collectives from Nigeria to Liberia.

One well-known Africa-involved ethical brand is Edun. Its new designer Sharon Wauchob has just returned from her first trip to east Africa. She was struck by “the freshness as far as our industry is concerned. We’ve tried other countries like India for so many trends, but here are crafts that have not been explored in terms of [western] fashion.”

Wauchob hints that the collection to be shown in New York next September will include “metal and beads but something beyond ‘Let’s put these Maasai beads on a T-shirt.’” Meanwhile Edun has launched a mini World Cup line, which includes African-produced T-shirts with a football motif. All proceeds will go to the Conservation Cotton Initiative in Uganda.

Stephanie Hogg, founder of Sierra Leone-based NearFar, believes that “it is possible to create sustainable emplyoment through fusing African creativity with western demand for fashion.” NearFar creates printed playsuits and mini-skirts so enticing that they have been snapped up by cult chain Anthropologie.

Holly Hikido, a former Barneys New York fashion buyer, now commutes between Italy and Addis Ababa to collaborate on a line of featherweight scarves labelled “Sammy Made in Ethiopia”. Her former colleague Julie Gilhart, senior vice-president and fashion director of Barneys, says they are “bestsellers” across the US.

Max Osterweis, who along with ex-Gap designer Erin Beatty runs New York-based, Kenyan-made Suno, agrees. “The idea with Suno is to make clothing covetable enough internationally to provide our tailors in Kenya with long-term employment,” he says.

Michelle Obama is a customer and Carol Lim, of New York’s Opening Ceremony store, is also a fan. “I love Suno because of how the bright colours make me feel,” she says. “It’s kind of like an energy boost.” When customers hear the brand’s made-in-Nairobi story, “it makes the purchase all the more meaningful”, she says.

Helping connect such projects with bigger brands is the Ethical Fashion Programme of the ITC (The International Trade Centre, a joint agency of the World Trade Organisation and the United Nations). Run by Simone Cipriani, a veteran of the Italian fashion world, the programme aims to provide long-term employment under certified fair labour processes for artisans working in impoverished areas.

While the catwalk names getting involved remain under wraps, there are already repeat customers, such as Luisa Laudi, creative director of MAX&Co, a brand of the Max Mara Group aimed at younger customers. “Working with Kenyan craftswomen in the slums is complicated and not like producing accessories in Italy,” she says, “but this is not charity. The accessories are great and in line with our production standards.”

But, Cipriani warns: “If fashion companies don’t fulfil their promises, the damage is severe. There are cases of micro-producers abandoning their own cottage industries to work with outsiders and then it stops and they are also deprived of the little they had before. The result is brutal. They starve.”

The ITC’s long-term projects are designed to mitigate against the damage of Africa going in and then out of fashion. Olowu says: “The world, including the fashion world, is becoming ever-more global. I think the African influence is more than a trend. Now it’s part of the melting pot.” 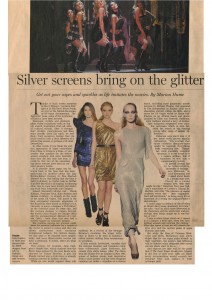