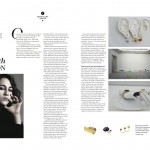 “ I never understood why recycling had to be cheap or amateur,” says Ilaria Venturini Fendi. “But then, I’m a Fendi!” Indeed, the bubbly blonde Italian is the youngest daughter or Anna, one of the five Fendi sisters who re-imagined the possibilities of fur and leather transforming the family atelier into a worldwide brand. Her sister Silvia Venturini Fendi is the head accessories designer at the label, which is now under the LVMH luxury umbrella. And her niece Delfina Delettrez Fendi has made a name for herself with a goth-meets-glam jewellery line. Yet it is Ilaria, right now powering her jeep down a dirt track on her organic farm outside of Rome, who is proving to be the true style revolutionary of the famous fashion clan.

Her Carmina Cmpus line-which includes totes, purses, computer bags, and iPad covers- is grabbing attention for using old stuff in new ways. The Bags, made my communities of disadvantaged people, are about as green as it gets. Many of them are created out of reclaimed and recycled material including leftover fabrics, old blankets, and even discarded soda-bottle caps. But let’s nip in the bud any thought of “eco-ugly” fashion- this is Made in Africa-meets- Made in Italy, which translates into exuberant style fused with flawless finishing. On offer at such rarefied global stores as Milan’s 10 Corso Como and London’s Dover Street Market, these are not your average do-gooder totes. The bag slung at Venturini Fendi’s feet as she drives for example, blends pieces of khaki canvas reclaimed from a safari tent (the ones used for five-star tourism become unusable after several seasons) with artisanal patchwork made from off-cuts of the kanga cloths that comprise the traditional East African garment.

Growing up in the Fendi atelier, Venturini Fendi made dresses for her dolls out of scraps. “I hate waste,” she says as she brakes to avoid a flock of sheep. “Always surrounded with precious materials, we were taught to be careful.” Farming is also in the bloodline, from her father, Giulio Venturini, who dies when she was 10. While his day job was in the construction industry his passion was nature. He taught his daughter how to ride, and she still remembers their country outings together. As for her farm, Venturini Fendi brought I Casali del Pino nearly a decade ago, with the aim of turning her back on the fashion business for being “so passive about what really mattered, like the environment.” Today milk from the aforementioned sheep is used to produce four kinds of cheese, including tangy pecorino. There are also ducks, pigs and hens as well as two donkeys so ludicrously tame they keep trying to nuzzle up and say hello.

It was her bees, however, that lured Venturini Fendi into producing high-end accessories in Africa. In 2007 the University of Rome asked her to share her apiarist insights with some visiting beekeepers from Cameroon. They, in turn, thanked her by presenting her with a traditional Cameroonian hat, which looks somewhat like a crazy crocheted hedgehog. Once a Fendi, always a Fendi: Rather than put the gift on her head, she immediately re-imagined it upside down and trimmed in leather, transformed into a funky little bag.

Just before meeting the beekeepers, Venturini Fendi has begun to miss the world she thought she’d left for good. She had reconfigured her greenhouse into a design studio, where she has been joined by a clutch of former colleagues from the days when she’s worked at Fendissime, in the Ninties, a youthful secondary line that was shuttered after LVMH purchased Fendi. The team’s goal: to figure out how discarded materials could be refashioned at the highest possible level. The results, plus those created by other eco-minded designers, would soon be sold at Re(f)use, a green emporium that Venturini Fendi set up in a family owned building in the heart of Rome.

Putting the hat-turned-bag into production involved a group trip to Dschang, the Cameroonian town from which the bobby berets originate. (Both men and women wear them,” she says. “They look incredible.”) After forging a collaboration if with local artisans, however, she was left with questions: How was she to know if she was paying workers too little or- just as damaging in a fragile economy-too much? For answers, Venturini Fendi turned to Simone Ciprani, on officer at the Ethical Fashion Programme of the International Trade Centre, which is the joint body of the United Nations and the World Trade Organization. (Full disclosure: the author consults for the program.) The mission of the Ethical Fashion Programme is to harness fashion as a vehicle out of poverty, connecting the world’s most marginalized people to plugged-in designers in Paris, New York, Milan and elsewhere. Production of the hat-bags continues at a small scale in Cameroon, while artisans in Kenya produce a wider range of styles. Carmina Campus employs 69 Kenyans full time, many from the notorious Nairobi slums of Korogocho and Kibera. “It is about real people with faces and names and stories, who live in a different way now,” says Cipriani, who can’t help but be impressed by Venturini Fendi. “I was astonished to see her in the dump sites of the slums, talking with the people for a long time. It is not an easy place.”

Venturini Fendi’s latest project is a three-way collaboration between Carmina Campus, the ITC, and 10 Corso Como owner Carla Sozzani. This time the bags, which just made their debut at Sozzani’s Milan boutique, are lined and trimmed with leftovers from 10 Corso Como’s signature collections- but they are finished in Africa. “What I didn’t like when I was in fashion before was that what you created was gone in a season,” Venturini Fendi says. “Now I want ot make lovely things that last. When I hear that other designers want to do the same, I am happy.” Indeed Vivienne Westwood, who is also passionate about the environment, is collaborating with the ITC in Kenya-both women believe fashion’s aspirational aura allows the industry to punch above its weight when it comes to getting notices. In this lies a route to real change, and while moving fashion away from a trend-driven model is quite a lofty aim, forging a new path, has after all, been in the Fendi DNA for several generations.

“I want fashion to be the promoter of change,” says Venturini Fendi as she exits her jeep for a walk along the river that flows though her farm, “to the point that there will no longer be any need to make a distinction between fashion and ethical fashion.”