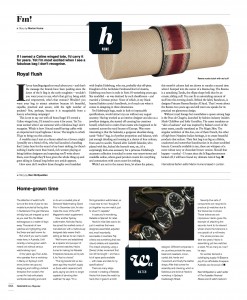 The day after any televised royal event, I know just what my mum is going to say. “Did you see the way the Queen walked down those stairs? Not holding a handrail and she never looks down!” HRH’s agility fascinates my not particularly Royalist mother. I was wondering what both she and her Maj might have made of the scene at a recent fashion party. The exit was via a vast marble staircase, so I hurried down the centre then waited and waited as everyone else teetered to ground level, clinging to the rails as if this were the sinking of the Titanic. Isn’t the purpose of a shoe that you can walk in it, including down a stair? But what’s on­trend now are styles so unbalanced that the fastest speed is a hobble. HRH would be amused by that!

Yet fashion decrees that when one must ­have reaches the realms of the ridiculous, another becomes sensible to compensate. Handbags, once so weighed down with hardware you could hardly lift them empty, have become more practical. What is chic now is unadorned and calm. (Imagine here, please, handbags by Celine. So simple. So lovely. So expensive.) HRH knows all about practical bags – she’s had the same style swinging off a regal forearm for the past half century. Indeed, maybe not just the same style, perhaps the same actual bag? I suspect she owns but three: one cream, one black and one which they re­cover to match whatever primrose ensemble she is wearing. Those of us who can’t avail ourselves of such a service do need a few more choices.

I made one a month ago. As I walked to the office, I decided to buy a rucksack, a style I have not owned since I gave up backpacking in my early 20s. Mine, though, is black canvas, with a leather base and a pocket for phone and keys. It is not at all something you would take on a scout camp. That the label, Ally Capellino, is not better known in Australia is something I am trying to change, one convert at a time. The label sells online, at the Tate galleries in London and in just two little London stores.

If your tastes are snazzier, may I draw your attention to the bags of Baraboux. Reema Bandar Al Saud of Riyadh was looking for a solution to the organisational needs of a globe trotting lifestyle and decided to do something about it. These are not schlepp­-it-­through-­the-sand bags, although they’d be perfect if you were, say, flying Emirates and doing a few days stopover in Dubai. I swooped in on the Marie, a day bag with detachable pocket­ purses on the outside, for when I’m travelling and a rucksack won’t cut it. Usually you put purses inside a handbag, but this way, you can go: “Can leave that one in the hotel. Need that one. Don’t need that one until later.” Amazingly, the bag looks equally attractive with any combination of pockets attached.

Every women knows the prettiest evening bags are the most useless. It’s a fantasy to think all we need to carry is a lipstick and a hanky. The Reema bag has a neat trick: a metal mesh cuff which looks like a decorative detail to a black satin clutch, yet slides around the barrel revealing two compartments – one for things you don’t mind people catching a glimpse of, one for those necessities you do. Phone, business cards, keys and other items a girl needs close at hand. I dumped them from one bag to the Reema. Call that a sale.