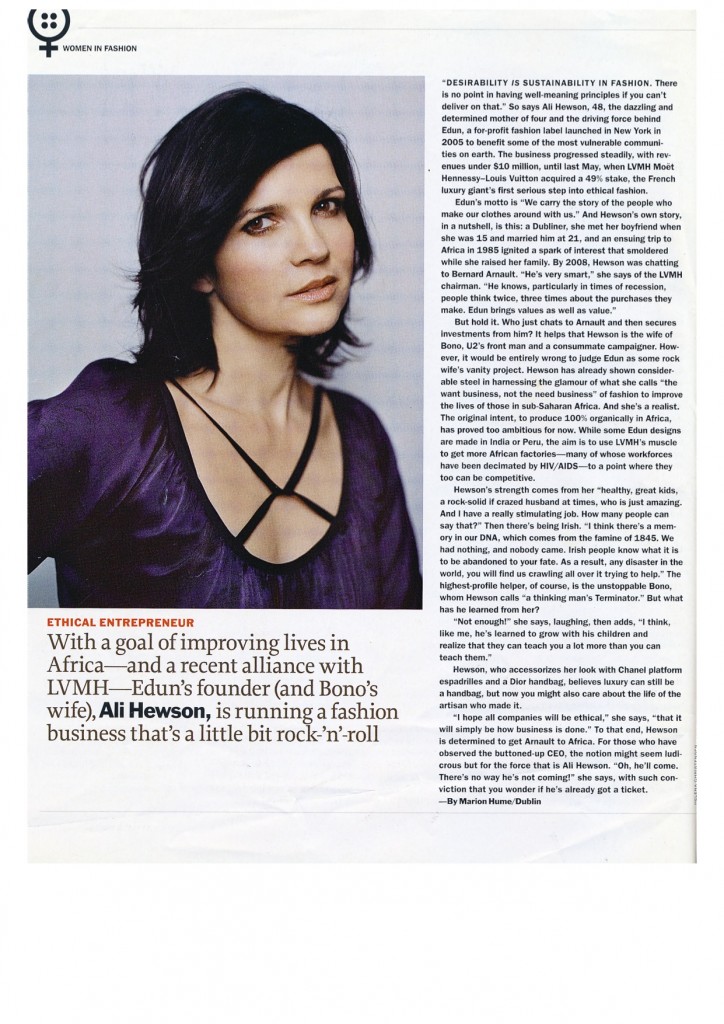 “Desirability IS sustainability in fashion. There is no point in having well-meaning principles if you can’t deliver on that.” So says Ali Hewson, 48, the dazzling and determined mother of four and the driving force behind Edun, a for-profit fashion label launched in New York in 2005 to benefit some of the most vulnerable communities on earth. The business progressed steadily, with revenues under $10  million, until last May, when LVMH Moët Hennessy–Louis Vuitton acquired a 49% stake, the French luxury giant’s first serious step into ethical fashion.
Edun’s motto is “We carry the story of the people who make our clothes around with us.” And Hewson’s own story, in a nutshell, is this: a Dubliner, she met her boyfriend when she was 15 and married him at 21, and an ensuing trip to Africa in 1985 ignited a spark of interest that smoldered while she raised her family. By 2008, Hewson was chatting to Bernard Arnault. “He’s very smart,” she says of the LVMH chairman. “He knows, particularly in times of recession, people think twice, three times about the purchases they make. Edun brings values as well as value.”
But hold it. Who just chats to Arnault and then secures investments from him? It helps that Hewson is the wife of Bono, U2’s front man and a consummate campaigner. However, it would be entirely wrong to judge Edun as some rock wife’s vanity project. Hewson has already shown considerable steel in harnessing the glamour of what she calls “the want business, not the need business” of fashion to improve the lives of those in sub-Saharan Africa. And she’s a realist. The original intent, to produce 100% organically in Africa, has proved too ambitious for now. While some Edun designs are made in India or Peru, the aim is to use LVMH’s muscle to get more African factories — many of whose workforces have been decimated by HIV/AIDS — to a point where they too can be competitive.
Hewson’s strength comes from her “healthy, great kids, a rock-solid if crazed husband at times, who is just amazing. And I have a really stimulating job. How many people can say that?” Then there’s being Irish. “I think there’s a memory in our DNA, which comes from the famine of 1845. We had nothing, and nobody came. Irish people know what it is to be abandoned to your fate. As a result, any disaster in the world, you will find us crawling all over it trying to help.” The highest-profile helper, of course, is the unstoppable Bono, whom Hewson calls “a thinking man’s Terminator.” But what has he learned from her?
“Not enough!” she says, laughing, then adds, “I think, like me, he’s learned to grow with his children and realize that they can teach you a lot more than you can teach them.”
Hewson, who accessorizes her look with Chanel platform espadrilles and a Dior handbag, believes luxury can still be a handbag, but now you might also care about the life of the artisan who made it.
“I hope all companies will be ethical,” she says, “that it will simply be how business is done.” To that end, Hewson is determined to get Arnault to Africa. For those who have observed the buttoned-up CEO, the notion might seem ludicrous but for the force that is Ali Hewson. “Oh, he’ll come. There’s no way he’s not coming!” she says, with such conviction that you wonder if he’s already got a ticket.

Ethical Jewels
Flashion a sparkling engagement ring need not be a source of shame- the jewellery industry now has a conscience.
by Marion Hume
Telegraph | June 2009

Glittering rubies from Mogok; vivid emeralds from the Panjsher Valley; gold all the way from Serra Pelada: time was when fables of gems and precious metals coming from far-flung corners of the earth were imbued with thrilling thoughts of romance and daring-do.

Today, we know it’s much more complicated. The 2006 movie Blood Diamond, starring Leonardo DiCaprio, brought the issue of conflict diamonds to the forefront of the public consciousness. (To be fair, the diamond industry was ahead of Hollywood having set up the Kimberley Process Certification Scheme, which tracks gems from mine to retailer, in 2003).

However, the trade in coloured stones can still be murky. Fancy helping a military junta to continue persecuting Burmese pro-democracy leader, Aung San Sui Kyi, with that ruby? Or propping up an Afghan warlord with those emeralds? As for gold, photographer SebastiЛo Salgado shocked the world with hellish images of the Serra Pelada gold mines of Brazil, published in 1986. What’s chilling is that, in some parts of the world, people still clamber like ants over slurry in open mines. Still feeling smug about the “fab” ring you picked up cheap on an exotic holiday?

Thankfully, change is happening right across what was the least ethical area of the luxury business. In recent years, De Beers, which remains the global force in diamonds, has undergone a remarkably positive transformation.

The World Gold Council has a strict code of social responsibility and earlier this year, The Responsible Jewellery Council introduced a certification scheme to ensure high ethical standards.

This week is Coutts London Jewellery Week. This offers the public not just the chance to take part in a treasure hunt with a difference and to meet both upcoming jewellers and such home-grown international stars as Theo Fennell, Shaun Leane and Stephen Webster, it also lets us do so with a clean conscience: every participant has had to sign an ethical charter.

“Sellers must guarantee that diamonds or other gemstones are conflict free, based on personal knowledge or written guarantees provided by the supplier,” explains councillor Guy Nicholson, board chair of the City Fringe Partnership, the public body which oversees funding of an initiative which has also helped create or safeguard more than 170 jobs and establish 15 new businesses in the capital since it was set up two years ago.

“Many of the participants in the week have chosen to highlight the role that ethical sourcing and production play in their work,” adds Cllr. Nicholson.

One of these is Tanya Bowd, who travelled to Colombia in March to witness indigenous mining communities united in both saving their rainforest environment and their livelihoods. Bowd is helming “The Candescent Project” at the Art Workers Guild in Bloomsbury next week (June 8 – 14, www.artworkersguild.org), an exhibition which aims to draw attention to a “green gold” called Oro Verde. Cyanide, used in some mining, can spell ecological disaster – a single wedding band from an unpoliced source can leave three tonnes of toxic waste in its wake. Oro Verde uses no harmful chemicals and the miners receive a fair wage. “The success of this small project has shown there’s a much bigger market for ethical gold,” says Bowd.

Artisan jeweller Daphne Krinos, who makes one-off pieces retailing from £500 to £14,000, recycles gold herself. “I melt it with a torch,” says Krinos, whose work can be viewed at the Creation II exhibition at The Goldsmiths’ Hall in London (020 7606 7010, www.thegoldsmiths.co.uk). “It’s a pleasure to take apart a small piece that would lie forgotten and to create something new.” As for stones, Krinos favours rough, brown diamonds from Australia, where the supply line is clean. “My clients certainly ask questions and I’ve always asked those questions first,” she says.

But rogue stones do reach the international market place. That the diamond trade is now bound by the Kimberley Process has reduced conflict gems to 1 per cent of supply, an improvement on 15 per cent in the Nineties. However, the transit across borders of easy-to-conceal rubies, emeralds and sapphires continues. “Most gems are found in the poor parts of the world and they end up on very rich people’s fingers and it’s complicated,” says Stephen Webster, whose clients include Johnny Depp, Kate Moss and Jay-Z.

Webster, who is opening a London flagship store on Mount Street next Thursday, has earned a reputation for agitating for change. “When I started [as a junior in 1975], no one mentioned ethics, but then the working conditions in Hatton Garden [the centre of London’s jewellery trade since the 1870s] were bad enough. You didn’t have to go as far as Africa!” he jokes. His “Eureka moment” came when he took part in a Radio 4 broadcast a decade ago, “up against a journalist who ripped into me about conflict diamonds.” Since then, he has visited mines, put pressure on smelters and ensured his stones are as pure as possible.

Webster is a fan of Tanzanite, the royal blue gemstone found only in a 13km seam in the foothills of Mount Kilimanjaro, where the mines are now considered among the safest in the world. This, plus some profits, go directly to the indigenous communities in Tanzania. However, Webster points out that boycotting gems from other sources is not the answer “because you wipe out whole communities. You have to stick with it to make it better. None of this is easy”. Indeed; De Beers recently suspended operations in the strife-torn Democratic Republic of Congo but as a result, thousands lost their jobs.

“I’m 50 now,” says Webster, “and of my generation, some of us are bothered. But anyone coming into the industry is very bothered.” “Ethics are key,” concurs Marisa Hordern of Missoma, which is featured among 10 upcoming names in Liberty’s Rising Gems exhibition at London Jewellery Week. “We visited at least 20 manufacturers before we chose the one we work with in India. We try the hardest we can.”

To Bec Clarke of jewellery e-tailer Astley Clarke, fine jewellery without ethics simply has no sparkle. “Before people spend, they want to be sure that what they are buying comes from a sustainable source and is made by people who are paid a decent wage,” says Clarke, who next week launches a futuristic capsule collection of rock crystals with sapphires created in collaboration with fashion designer, Osman Yousefzada.

When Londoner Richard Thomas proposed to his girlfriend, Fiona Lee, last year, that he didn’t hand over a ring was, “thanks to Hollywood,” says his fiance. The pair had seen Blood Diamond so “we started Googling, but when it came to buying a 100 per cent ethical ring, there were tiny places in America – and obviously, we’re in England – or online only and we just didn’t want to buy an engagement ring off the internet,” says Lee. The solution was Cred (01243 773588, www.credjewellery.com), an ethical pioneer since 1996, based in Chichester. “So we took the train down, then to get the right diamond and the right size took another three months,” continues Lee, who will marry Thomas in September. The result? A white-gold band with a sparkling Princess-cut gem, “which is gorgeous and I don’t feel bad when I look at it,” she beams. 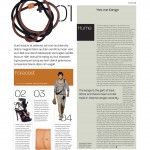