Style in and of itself has power

Right now, I’m obsessed with how accessories can grab attention. This is far from unique; I know women who position their latest Louboutins at the end of the bed at night so their first sight in the morning is guaranteed to be gorgeous. I know others – and perhaps you do too – whose idea of relaxation is window-­shopping the latest Brian Atwood stacks online. I don’t know Asma al­ Assad (at time of writing, Syria’s first lady, but things can change fast in a bloody conflict…) but surely one of the only vaguely normal things about a contemporary woman in the most abnormal situation is that she was known to press ‘add to basket’ in times of stress?

I know this is risky, but let’s workshop Asma (first ladies, whether courageous or cowardly, tend to be first-­name only). She shopped just like her former colleagues when she was a London-­based investment banker. Then recall what happened when the GFC hit like a slap in 2008. Pre GFC, the City of London was the leading ‘delivery to desk’ market for net­-a­-porter. After the crash, it is whispered that the same high fliers shopped not less, but more, although they ticked the ‘no packaging’ option and had their nannies sign for the deliveries at home instead of having anything turn up at the office.

I know I’m on a knife edge here, but can I state that it isn’t the taste for fashion that’s the sin. If it were, how explain that one of the most charismatic activists I know wears Ferragamo pumps, polished to a perfect sheen? “No one cares about your image; we care about your action” was the slogan adopted by the wives of ambassadors to the United Nations in a commendable effort to grab Asma’s attention with a YouTube video, International letter & petition to Asma al ­Assad, signed by women all over the world, posted back in April. “Some women care for style and some women care for their people” went the commentary, suggesting these interests are mutually exclusive. Yet I’ve spotted plenty of on-­trend handbags at human rights conferences. My point is, it isn’t what’s on Asma’s feet that is of concern; it’s what’s in her heart. “Stop being a bystander,” begged the video. Perhaps, by the time you read this, she will have found the courage to stand up to be counted. If she manages to do the right thing, who cares whether she does so wearing Louboutins or cheap shoes?

Someone who was just a bystander in another strife­-torn country – she was visiting her sick mother when students wounded in a military crackdown were brought into the hospital – is another British­-educated woman who knows the power of accessories. When this woman made a decision that she could not remain indifferent to what was going on outside the walls of her family’s comfortable lakeside villa, she stepped centre stage in front of half a million people wearing a look from which she has never wavered: tailored blouse, ‘longyi’ wrap skirt, signature flourish of flowers in her hair. Recognising the power of style, Aung San Suu Kyi has never let it slide, despite two decades of mental torture under a brutal regime. When she walked towards a platoon of soldiers, their rifles cocked to fire, she did so shielded by nothing but the power of that iconic image, earning her the moniker ‘steel orchid’. The great pro­democracy campaigner will make her first overseas trip in 24 years this June, and she will be recognised wherever she goes. Image and action – now that’s the potent combination. 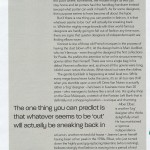 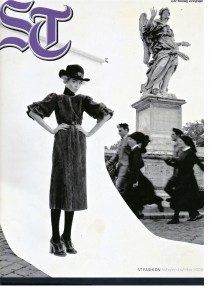 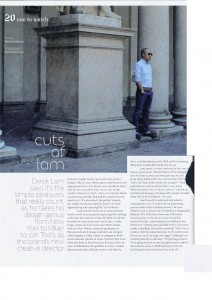