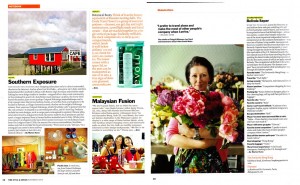 Fashion on the Fly- Belinda Seper

Were you to glance across the front row at any fashion show and spot a striking 6-ft.-tall (1.8 m) Australian clad in Marni, you would not be surprised to learn that Belinda Seper — whose two-nation, 13-store retail empire makes her one of the most-important independent fashion entrepreneurs in the southern hemisphere — was once one of Sydney’s top models. Less expected, however, would be the discovery that Seper was formerly Captain Seper, having spent 12 years rising through the ranks in the Army Reserve (the equivalent of the U.S. National Guard). She now spends much of her time traveling the globe, spotting the latest trends and placing seasonal orders for her stores, some of which are aptly named Belinda. The navigational skills that in the army earned Seper the nickname “the human compass” have proved useful while wending her way through the fashion capitals.

Jet-lag remedy: “Melatonin, red wine and lots of sleep on board.”

Packing tip: “Keep clothes on hangers, place in dry-cleaning bags, roll up and then put items in luggage.”

Items I can’t travel without: “A picture of my daughter Sophie, a gray cashmere wrap and a Diptyque candle.”

Place I’ve never been but would like to visit: “India — I have had my visa issued twice and still have not made it.”

Favorite travel companion: “I prefer to travel alone and make the most of other people’s company when I arrive.”